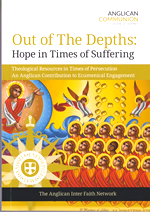 Out of the Depths is an Anglican theological resource written for Christians of all traditions; both those who are undergoing persecution and those prayerfully trying to make sense of persecution and support their Christian brothers and sisters.

An Anglican exploration of Christian attitudes to the Holy Land, with special reference to 'Christian Zionism'

The truth of the Gospel and the call to dialogue

This short treatise is the culmination of work in which NIFCON has been engaged over the last four years.it seeks to provide the discernment of a distinctively Anglican theology of inter faith relations which can be a part of the drawing together of the rich reflection which has gone on over the last forty years since Nostrae Aetate but with renewed impetus more recently. If we proclaim and serve a generous God can we be any less generous in our dealings with our neighbours of other faiths? How does our understanding of the Trinitarian nature of God, a core Christian belief, inform the content and method of our thinking about inter faith relations? How do we affirm the importance of dialogue without compromising our allegiance to the one Lord and Saviour? This document is offered for study and as a stimulus for discussion and further reflection.

In 2011 the NIFCON Management Group produced and authorised a 'study guide' for Generous Love. The study guide takes the form of an electronic i-book. It can be accessed here. On the right hand side of the page is the original text of Generous Love. By clicking on hyperlinks in the text a range of explanatory boxes, Bible studies, etc will open on the left hand side of the pages. At the bottom of each section there are questions for discussion and a prayer. Fuller instructions for use will be found within the i-book once you have opened it up.

Written for members of the Church of Ireland to equip them as members of a society experieincing accelerated diversity of faiths and cultures these Guidelines build on the agreement reached at a Porvoo Consultation in Oslo, Norway in 2003. They are offerd so as to be helpful in situations where people of different faiths will meet with one another and so find use beyond their immediate audience.

The taking of appropriate decisions about situations in which we will find ourselves is important if understanding is to challenge fear and ignorance, and if all concerned are to be true to their fatih. Living our own faith confidently and compassionatley is the first requirement in meeting people of other faiths. The second requirement is to learn about what those people understand by their own fiath. When Interfaith co-operation works, the lives of all are enriched. It is hoped that these Guidelines will contribute to fulfilling this expectation.

Christian Responses to Islam: A Struggle for the Soul of Christianity

The Right to convert and the Indian Constitution

The Archbishop of Canterbury addresses The Christian Muslim Forum's meeting 'How does faith fit in Britain today?' at King's College Cambridge.

Having enjoyed the hospitality of Archbishop Josiah Idowu-Fearon in Kaduna, Nigeria, earlier this year, Bishop Michael Jackson invited the Archbishop to share in the Macartan 1500 celebrations in his own Diocese of Clogher, Church of Ireland. St Macartan is the Patron Saint of Clogher. 2007 marks 1500 since his death. In his lecture (as part of a series entitled "Christianity and Conflict") the Archbishop sets out the background to recent conflict in Nigeria between Christians and Muslims.

Interfaith Service of Remembrance and Hope 2005

The Liberal Jewish Synagogue, St. John's Wood 21 July 2005... May I express my gratitude to the Director General of the Mosque, to the Imams there and to Revd. Anders Bergquist and the clergy from all the churches in St John's Wood for their support and work in bringing this service to fruition. We are grateful to the Three Faiths Forum for their support for this endeavour and welcome representatives to address us following the conclusion of the service.

Islamic Voices of Outrage at Terrorism

This article appeared in the Church of England Newspaper 2nd December 2002. Andrew Carey's article (24th October) echoes Margaret Thatcher, who famously remarked that she had not heard enough condemnation of September 11th 'from Muslim priests'. In Leicester I work closely with the kind of moderate Muslim leaders that Andrew Carey says have remained muted about terrorism.

The Impact of September 11th on British Faith Communities

One result of September 11th has been a great interest in Islam, demonstrated by a large increase in sales of the Qur'an and books about Islam. It is shown also by the number of references to Muslims in the British daily press. The increase of articles in the broadsheets is around 250-280% in the year June 20th 2001 until June 19th 2002 (in the London Times, for example, from 535 to 1486).

A Buddhist Monk as a Member of a Christian Mission College

I first met the Venerable Sutadhara in 1999, when I was in Sri Lanka as a member of a Friends for Peace delegation of Churches Together in Britain and Ireland. As with every other outside visiting group, we were able to do little to further the cause of peace in this most intractable of civil wars, apart from gaining much more understanding of the complexity of a struggle which has ethnic, linguistic, social and religious connotations.

The resurgence of various religions in our world in the last hundred years and the events of last year, not only in the United States of America but also in other parts of the world, compel Christians and people of other faiths to look again at the very foundations on which their beliefs are built. It is important to reflect again on Earth, Air (Wind), Fire and Water and their theological significance.